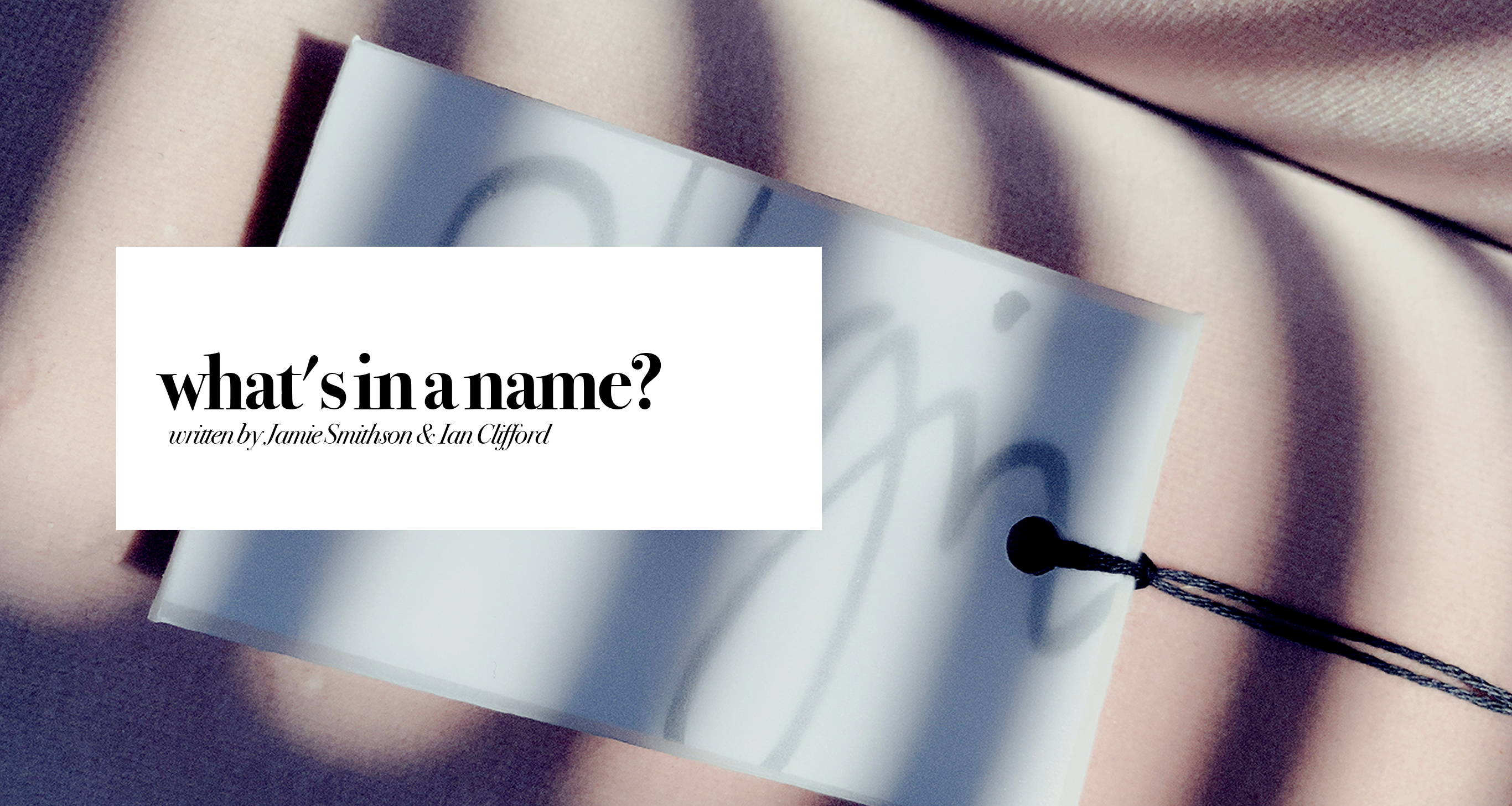 Everything, when we’ve done our job and communicated what we stand for and stand against.

Everything, when we’ve found a group of people who associate the name with those qualities and the quality of our clothes.

Everything, when that name makes you think of us, our product and our values.

But, when you choose the name at the moment you start your company, it means nothing.

Nothing, because it doesn’t carry those values.

It isn’t imbued with any heritage or story because those things can only come as you present your message to the world and let people, your potential customers, be part of how that story and message develops.

The most difficult thing about your name at that stage is that people who discover your brand immediately bring their own interpretation and meaning to the name you’ve chosen.

They will assume that you’ve chosen it for the reasons that pop into their head and you’ll need to work harder to give your chosen name the position and meaning that you’d planned.

Sure, there are good and bad names.

You can make a poor choice because of negative connotations that you hadn’t thought through. Or maybe just the shape of the word and the way it can be misconstrued could cause you to be misunderstood.

There’s just some downright bad ideas for names that people mistake as genius and only find out later how wrong their insular view turned out to be.

We thought (or thought we’d thought) about all these things when we decided to call this business Elgin.

It’s got nothing to do with Scotland and the town in Moray.

We were surprised, perhaps a little naively, that even a small number of people assumed that we must have some connection with a place that had the same name.

We haven’t pretended to have a connection with that town and area and we don’t manufacture there. Although some of our fabrics and clothes are made in Scotland, none of the manufacturers and artisans are anywhere near Elgin itself.

Nor have any of our photoshoots taken place in or near Elgin. To date we’ve shot in and around South Shields (home of Jamie, one of our founders), in Leicester where our clothes are made, in the Lake District and in London.

We really hadn’t thought that people would jump to that geographical conclusion.

We knew there was a town called Elgin in Scotland and Jamie had been there as a youngster, but we weren’t attaching ourselves to it.

We felt we were doing the same as firms such as Patagonia (not from Patagonia, but rather the US), and had chosen a name based on a range of reasons and, importantly, a personal emotional connection.

We settled on the name because it just kept coming up as a word whose look and feel we liked.

We felt it had something innately British about it and, when written down, the form of the letters and the word have a pleasing roundness and power.

At least to us.

But the reason we had even added the word ‘elgin’ to a very long list of possible names isn’t really that prosaic.

At the early stages of a new venture you try out all sorts of ideas and possibilities, in terms of products, plans and, yes, names.

Jamie liked the name because he’d lived on Elgin Avenue in Maida Vale, West London a few years before we started the discussions that would lead to us creating this company.

He’d frequented the pub there, The Elgin. Indeed we returned there as one of the places we’d meet up to hatch our plans.

Many years before I’d had an office off Portobello Road in another part of West London and one of the places I and my colleagues would end up at the end of the working week was another pub, also called The Elgin.

Two pubs with the same name, but only a few miles apart.

Serendipity maybe? You could easily do a (very short) pub crawl of just pubs called Elgin in that part of London.

We were trying to think of names that evoked a Britishness and a sense of heritage.

I’m not going to tell you what else was on the list, but Elgin kept standing out. That it was good enough for two of our favourite pubs gave it that personal emotional connection for us.

And although it’s not quite true to say we’ve named our business after a pub, could there be anything quite as British as doing that?

The Earls of Elgin

And both the pubs had been named after them in one fashion or another.

It seems that they, like us, didn’t actually have much to do with the town whose name they bear either, given as they were to having their seat in Dunfermline but far more famously, leading Britons in every corner of the world rather than holding the fort on the Moray Firth.

The Earls have been at the heart of the British Empire’s global expansion for generations as ambassadors and statesmen, governors and viceroys, but also as explorers, inventors and entrepreneurs.

Perhaps naively, we hadn’t given them any thought before we settled on our name.

In retrospect it’s clear that some of the heritage inherent in the word ‘elgin’ comes from this connection. Some of that Britishness we were after that we can now see more clearly comes with more than a hint of Empire. Not what we were after and certainly not something we were seeking to evoke, but undoubtedly something that gives the word some of the weight we innately felt.

And, some might say, that connection with the Earls and their contribution to Empire is not necessarily all good.

The 7th Earl of Elgin famously, or should that be notoriously, brought the classic Greek marble sculptures from the Parthenon and sold them to the British Government.

The 8th Earl was the key British diplomat in the Second Opium War in China where he ordered the destruction of the Old Summer Palace in Beijing and added Hong Kong to the British Empire. But, on the other hand, he also brought democracy to Canada.

These episodes of British Imperialism don’t sit so well with the less exploitative version of our modern global outlook but, trust us, they were not in our mind when we were drinking pints in The Elgin and planning on making the perfect white T-shirt…

Nonetheless, we have to admit that there’s something about their achievements that we’d be glad to live up to. The good bits, we mean.

So, named after two pubs, a hint of British adventure and a nod to a place with which we have no connection.

That’s what’s in a name…so far.